Limited edition to just 75 copies, with a signed Lambda gelatine print of Mick Jagger included alongside the book. Sold out worldwide with the publishers! Only two copies left in stock with St Marys Books. Sumo sized work, signed by David Bailey, and complete with a white tripod bookstand designed by Marc Newson. Includes a selection of four different dustcovers. This sumo size retrospective celebrates one of the worlds most influential photographers and the culmination of two year's researching his archives. gathering portraits from the 1960's to the 2010's we discover just under 300 subjects as varied as Nelson Mandela, The Beatles, the Queen, Salvador Dali, Bill Gates and Yves Saint Laurent. All printed big and bold in Bailey's signature style. Phenomenal sumo sized book and Taschen's latest art edition release. One of David Baileys closest friends, and together two of the coolest people in London during the 1960's -Mick Jagger was honoured to have been best man at his wedding.
Mick Jagger print measures 51cm x 61cm
'Big Book. Small Club.' 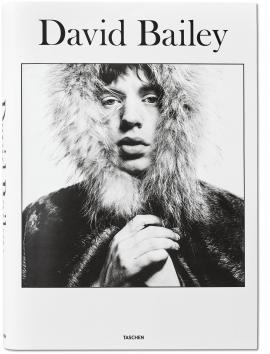