Books > Exploration > Cook's Voyage A Voyage Towards the South Pole, and Round the World

Cook's Voyage A Voyage Towards the South Pole, and Round the World

Performed in His Majesty's Ships the Resolution and Adventure, in the Years 1772, 1773, 1774, and 1775. Written By James Cook, Commander of the Resolution. In which is included. Captain Ferneaux's Narrative of his Proceedings in the Adventure during the Separation of the Ships. In two volumes. Illustrated with maps and charts, and a variety of portraits of persons and views of places, drawn during the Voyage by Mr. Hodges, and engraved by the most eminent Masters. Second edition of Volume II only (of two volumes). Original full calf leather boards with bevelled edges. Five raised bands to spine, with burgundy and black gilt tooled title bands. Twenty engravings throughout, several are double page and fold out. Seven engraved maps, three of which are fold out. A fold out table towards the rear. Front board, title page, pages i-iv, and rfep detached. Back board near detached. Ffep missing. Boards rubbed and worn. Expected toning to pages with foxing and spotting to pages towards the rear. Remarkable copy, complete other than the endpaper. iv + 396 pp. Opportunity to own a scarce work for a significantly lower price not to be missed! 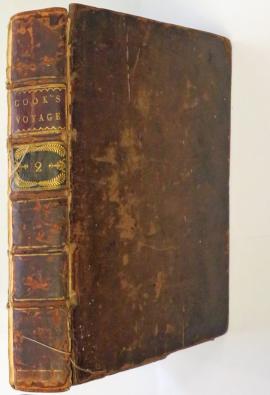