Books > First Editions > The Execution of Justice in England

The Execution of Justice in England

Full title: The Execution of Justice in England for maintenaunce of publique and Christian peace, against certeine stirrers of sedition, and adherants to the traytors and enemies of the realme, without any persecution of them for questions of religion. [sic]. Bound in modern brown buckram, woodcut device to title page and woodcut initials. Title page has been laid down and is somewhat soiled. Final leaf slightly damaged and professionally re-margined with small loss to some letters, quire D misbound. Otherwise an incredibly sound copy of a rare book that is over 400 years old. Lord Burghley wrote this anonymous work purporting to be that of an English Catholic who was loyal to the queen. In the wake of the execution of Edmund Campion, Burghley sought to differentiate between religious dissention and treason, arguing that Elizabeth I exercised her authority over her people rightly without the interference of the pope. This work was later published in French, Dutch, Italian and Latin to reach foreign readers as well as the British. This work last appeared at auction in 2000, and then only a handful of times before 1968. Scarce on the market, this insightful early work is a lovely piece of local and nationwide history. 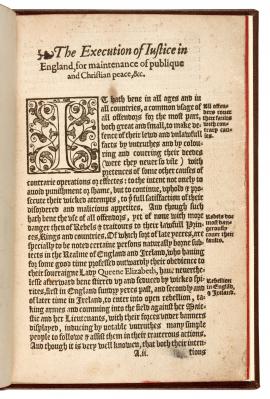