Books > Medical > Medical Commentaries. Part I. Containing a Plain and Direct Answer to Professor Monro jun. Interspersed with Remarks on the Structure, Functions, and Diseases of Several Parts of the Human Body

Medical Commentaries. Part I. Containing a Plain and Direct Answer to Professor Monro jun. Interspersed with Remarks on the Structure, Functions, and Diseases of Several Parts of the Human Body

Published By: Printed by A. Hamilton, and sold by Mr A. Millar, in the Strand 1762 (London)

Reduced Price! First edition bound in half brown sheepskin with marbled boards. Rear board has some scuff marks and light shelf wear but is otherwise bright and sharp. There is some worming to a few pages, marginal, brittle surrounding edges. Some expected browning to pages, the odd manuscript corrections in ink. Four engraved plates present as called for. Contemporary inscription in ink to title page of John Anderson. Possibly John Anderson (?-1804), English physician and author of three works, the most well known is 'A Practical Essay on the Good and Bad Effects of Sea-Water and Sea-Bathing', 1795. Overall very good condition. Dr William Hunter was a Scottish anatomist and physician. He is now perhaps best known after the 2010 controversy where it was suggested that Hunter and his contemporaries would murder pregnant woman for their studies, which has since been disproven. This work is a vehicle for Hunter to defend his priority in discovering the lymphatic vessels over Alexander Munro. It also contains anatomical descriptions and four engraved plates by his brother John Hunter, an equally famous surgeon. This is the first edition of part one of Hunter's medical commentaries. The second part was only published posthumously by his brother. An interesting and important work, relatively scarce and this copy is collectable with the fascinating possible provenance. 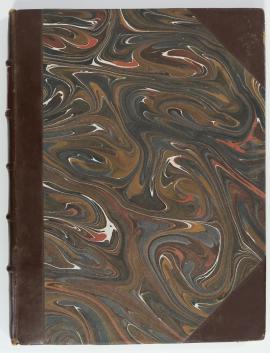