True first edition of the book that started it all, signed by JK Rowling! First edition, first impression softback of the first book in the Harry Potter series. As called for number line 10-1 on the copyright page; Wendy Cooling review; misspelt 'philospher'; repetition of '1 wand' - Errington's A1. Publisher's original pictorial covers, showcasing Thomas Taylor's iconic illustrations. 'Young wizard' to spine and rear cover. Flat-signed in black ink by author JK Rowling to half title. Light edgewear, some creasing where the cover has been opened, a few minor scuffs. Cover is vibrant without fading. Light foxing to prelims and half title. The odd toned patch and some spotting to pages, which are otherwise clean. Pages are a little toned to the edges which is very common with this book and is not as bad as many copies we have seen. Overall a sharp copy that has been read once and looked after. Flat-signed first editions are exceptionally rare, with the few that have appeared on the market previously containing a signed bookplate. JK Rowling's signature without any dedication is sought after. Additionally this is an early example of Rowling's signature, penned around the same time as publication when she was still unknown. Highly uncommon. True first editions are incredibly scarce, this being one of just 5,015 copies of the softback and is even more rare being signed. Signed first editions of the hardback have sold at auction for over £150,000. 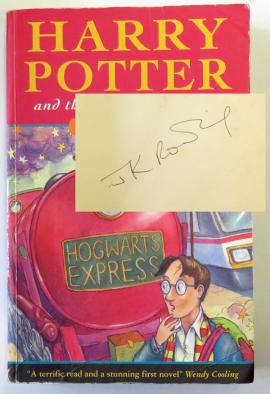