Hydropathy; or, The Cold Water Cure, as Practised by Vincent Priessnitz, at Graefenberg, Silesia, Austria.

Hardback bound in half leather with marbled boards. Five raised bands to spine, with gilt titles, borders and motifs. Renewed endpapers with faint imprint, perhaps binder: 'CM Italia' to ffep and 'Ingres' to rfep. Facsimile letter to the author tipped in after title. Errata slip to preface. Spine is sunned, minor scuff marks. Occasional light foxing to pages, thumbing and shading to fore-edge throughout although light. Otherwise a clean copy in decorative binding. Overall very good condition. xi + 338 pp. Priessnitz (1799-1851) was an Austrian farmer who is considered the founder of modern hydrotherapy as used in alternative medicine. Claridge (1797/99-1857) was a captain in the Middlesex UK Militia who introduced Priessnitz's methods to England and is largely responsible for its popularity. An interesting work, beautifully bound. 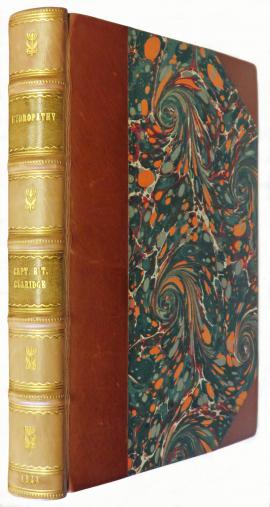