**Wisden The Cricketer's Almanack for the Year 1865

Being the 2nd Year of publication, and the 29th of the Reign of Her Majesty Queen Victoria, containing a calendar of the births and deaths of nearly all celebrated players who have appeared before the publice, the laws of cricket as revised by the Marylebone Club; all the matches played between the universities of Cambridge and Oxford since their commencement; the matches played by the Marylebone Cricket Club, the counties of Buckinghamshire, Cambridgeshire, Hampshire, Kent, Middlesex, Nottinghamshire, Surrey, Sussex, and Yorkshire in 1864; the doings of the twelve in Australia and other interesting information. An original example of just the second Wisden to ever be published, with expertly produced facsimile covers. Edges speckled red. Contents in beautiful clean bright condition, just the slightest touch of foxing. Some numbers added in ink to the bottom margin of a handful of pages near the start, only one to each page. Top edge a little darkened. Very good overall. Housed in a custom made velvet lined brown cloth slip case, with gilt year number to the spine. 160pp £ 6.5 now £5.2 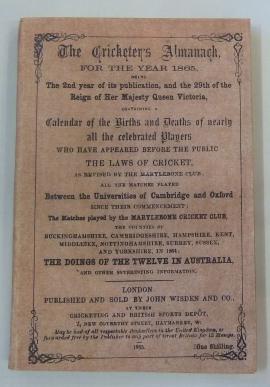