Original pen and ink sketch by Cliff Wright, illustrator of the dust jacket for the first editions of Harry Potter and the Chamber of Secrets, and Prisoner of Azkaban. Sketch depicts Harry Potter meeting a Hippogriff from the Prisoner of Azkaban, who is later known as Buckbeak. Inscribed 'To Louis-Charles / All best wishes / from Cliff' to top left. Manuscript title, Wright's name printed, and dated April '02 to lower left. This first appeared on the market back in 2011, which was the first time this sketch had been seen. Cliff Wright refused to illustrated further books for the Harry Potter series after his original artwork for the cover of Azkaban was lost by the publisher, so this incredible work may have been his last depiction of Harry Potter. Louis-Charles, to whom the inscription is addressed, is a personal friend of Wright's in Canada. The sketch is visually striking, and quite large measuring approx. 29 x 20.5 cm. (Full mount measures approx. 47 x 37 cm). An incredible collectable item. 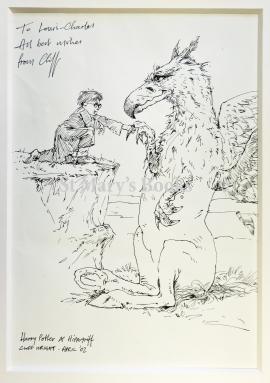